[Danger. Some of the following might be considered sneakily educational.]

The traditional names of the four horsemen of the apocalypse are War, Pestilence, Famine and Death. Although that’s not actually what it says in Revelations, the four described there could be interpreted (at a very hard pinch) to fit the traditional names. Pestilence is the one that really doesn’t fit but what the hey. I’m going with him as Number Two anyway.

Well, War has been a busy little boy lately, hasn’t he? About time for his brother to step in and give him a breather. No, I’m not talking about Ebola because, nasty as it is, it’s a local disease. It only spreads because of the modern insistence on interfering in everything and the West’s insane belief that disease can’t affect them because they have a degree in diseases.

The article blames ‘Enterobacteriaceae’ which made me wonder. Enterobacteriaceae is not the name of a species, nor even a genus. It is the name of a particular group of bacterial species which are all found in the gut. Some are also found elsewhere but most are only found in the gut. Gram-negative, facultative short rods for those who give a crap about this sort of thing. The group includes the mostly-harmless but occasionally-deadly Escherichia coli and the usually unpleasant members of the genus Klebsiella. Also Enterobacter, oddly enough. Hmm… Klebsiella used to be called something else, I’m sure. A lot of names changed while I was doing my first degree. Was it Aerobacter? I remember Pasteurella pestis changing to Yersinia pestis. But as usual, I digress.

Incidentally (yeah, a bit more digression, best get it over with), Escherichia derives from the name of its discoverer, one Dr. Escherich. I would be ambivalent, I think, about being immortalised in the name of a shit-bug. I mean, Dr. Fischer, whose name is immortalised in the brightly bioluminescent Vibrio fischeri, had a much better deal in my book.

Anyhow, I wondered why they were talking about an entire group of bacteria rather than specific ones – they surely must still have some science left at UCLA and it’s not that hard to identify a shit-bug. Never was, and it’s even easier and quicker with modern techniques. A quick search turned up an explanation.

The members of the group Enterobacteriaceae are not all closely related species but they have quite a lot in common. Many carry their antibiotic resistance genes on tiny circular bits of extra DNA called plasmids. They can then produce a long hollow filament called a pilus which, when it attaches to a related cell, causes the plasmid to replicate itself and transfer a copy down the tube to its pal. So the spread of antibiotic resistance does not always need to wait while one resistant bacterium replicates into a colony. Sometimes they can pass it around.

This, though, is the really scary part.

Healthy people usually do not get CRE infections – they usually happen to patients in hospitals, nursing homes, and other healthcare settings. Patients whose care requires devices like ventilators (breathing machines), urinary (bladder) catheters, or intravenous (vein) catheters, and patients who are taking long courses of certain antibiotics are most at risk for CRE infections.

See, all these Enterobacteriaceae are mostly harmless in their proper setting – in the gut. There, they compete with each other like crazed Olympian pie-eaters in a perpetual race to get the food first. The further down the gut you go, the less useful food is left and the harder they scrabble to get it. Perhaps this, which I really did use as a teaching slide, will help – 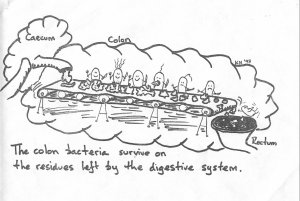 They eventually made me give it to the ‘pimp my slide’ department and they fancied it all up. That was the original. I think I still have it as a film-slide from the days before PowerPointless. I just drew it and photographed it on slide film. It’s a pig gut – humans have only a tiddly appendix instead of a proper caecum.

That competition for food is why, in the lab, a single bacterial species can grow so fast you can actually watch the growth medium go cloudy. Some species, under lab conditions, can double their population size every 20 minutes. They don’t do that in the gut because they are fighting off competition but take away the competition… and they still act as though it’s there.

There is one, Proteus, that we used to use as a class demonstration because you can really watch the colony spread across an agar plate. They are fast reproducers because they have to be. In the gut, slow reproducers literally end up right down the toilet.

So get one of these into your bladder, full of sterile urine with no competing species at all and in no time they’ll be right up the ureters into your kidneys. That’s gonna sting and it’s going to be hard to get the little buggers out again. Get one into your body fluids – ALL of which are currently bacterially sterile unless you’re infected – and your immune system will feel like it’s firing peashooters at Stukas.These bacteria reproduce faster than any cell in your body because that is how they stay alive. Oh and cell for cell… there are far more of them than you.

A ruptured gut can kill you in a day. Not from blood loss. It’s like letting caffeinated Gremlins loose in your body.

If so much as a light switch at Local Shop looked like that, I would hang my head in shame. The comments blame Thatcher, of course, because all those years of Labour governments who did the square root of fuck all about it and the current mob who don’t do much at all can’t be held responsible. No, it is all the fault of someone who was in charge well over 20 years ago and who is dead now.

Just as dead as all the people killed by a stupid ‘clean is cheap’ mantra that still pervades hospitals to this day.

You will never get any infection in Local Shop as long as I work there.

But I recommend you stay out of hospitals. Especially if you’re not feeling very well.

[Tomorrow is my first day off since New Year so I am a trifle tipsy now. If you find a typo or a grammar-nazi attack point, just keep it to your fucking self, okay?]