This was going to be about the Scottish election results but those are a disaster, not a ruin. The SNP are two seats short of a majority and might have to cosy up to the Lib Dems (5 seats) or the Greens (6 seats) to get policies through. New cry of Freedom!? Forget it.

Scotland was primarily Labour and Lib Dem not so long ago, and now the Lib Dems have fewer seats than the Green Men from Neverland.

Labour were actually down by 13 seats, while the Tories gained 16. The solitary independent is gone. Not really surprising, there isn’t much a single independent can do in a government. No matter how he tried, he won’t have been that much help to his constituents.

Anyway, the full sordid story is to be found on the BBC so I’ll move on to a much more interesting ruin.

I went to a church. A very old church. It looks like this – 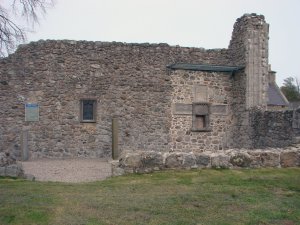 It was like that when I got there, honest.

It’s Kinkell Church and I’ve wanted to go look at it for years. It’s really not far away. Historic Scotland have done a great job of preserving the ruin, keeping it neat and tidy and looking after it in general. The one thing they haven’t done is provide any parking spaces anywhere near it.

This is along a very narrow country track that has a large and busy farm at the end. You don’t want to walk this way. It’s a long way with no pavement and has fast cars on most of it and tractors pulling huge machines on all of it. Survival is not guaranteed. I managed to get off the road and park but it probably wasn’t an approved patch of grass I parked on. There wouldn’t be room for two.

Anyway, I got there. Finally. The wall you see in the picture is the north wall. The bit in front that’s about two stones high is all that’s left of the south wall. So now you know which direction you are facing, here’s the instructions that were pinned to the north wall. 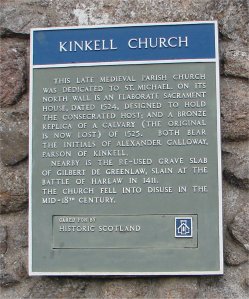 Memorise the information, then eat the screen so nobody else knows…

Yes, the bronze replica of the 1525 calvary is good but I bet the original was stolen rather than lost. Raiding churches was popular because they had most of the gold and valuable metals in any particular area. These days it’s more the lead flashing and copper pipes they’re after. 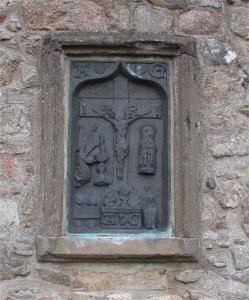 Bronze Calvary Replica.
If it had been a trout mask I could have invoked Captain Beefheart

All of this is open to the elements and yet still survives. There is a perspex shelter above the sacrament house but it’s not much better than a modern smoking shelter for protection. 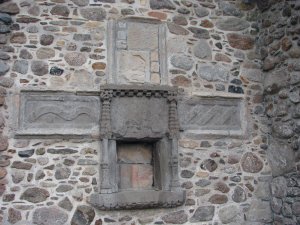 This part has clearly been rebuilt over the years, although most of the bits would have been available. Unlike the calvary, the 1524 stone-built sacrament house had no immediate value.

It’s sobering to think someone made that carving nearly 500 years ago and it’s still there. Some of the Pictish stones around here are 2000 or more years old and the carvings are still clear. I wonder if any of our current creativity will even survive the next solar flare?

The church had no windows in the north wall. A lot of old buildings around here are like that. It might have something to do with the vicious north wind that comes around in winter.

The big windows were in the east wall so the sun shone through for morning Mass to impress the congregation. There isn’t much left other than a display of stones at the west wall.

Pieces of the once-impressive window frames. 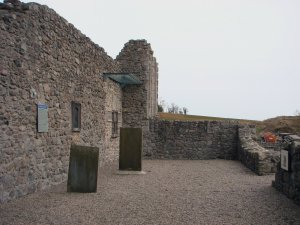 A couple of gravestones have moved inside.

One of the stones is hard to decipher but the other is the grave of Gilbert de Greenlaw, who died in 1411. You already know this if you memorised the information before eating your screen. If you didn’t, you wasted a screen. 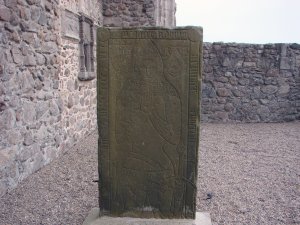 It’s in surprisingly good shape for its age because of a reason.

The reason is, the slab was nicked and turned over and used for someone else’s grave. The back of it looks like this – 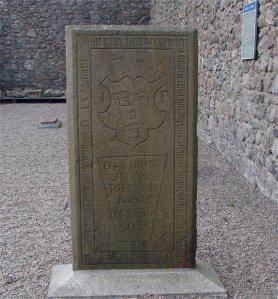 Not quite the same artistry, really.

It meant the original carving was protected by being face down. So not a total act of vandalism after all.

There are a few graves around the church, some extremely old and a few recent ones. One very recent one dated 2011 that I didn’t photograph. There will be relatives who might stumble across this article. Therefore it’s still consecrated ground even after all this time. 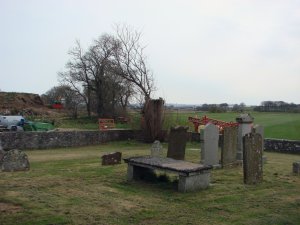 The graveyard is a bit sparse for the age of the place. Maybe they moved somewhere cheaper.

It is a very interesting ruin, in a place that has had habitation remnants since the 11th century and Pictish remains for a few thousand years before that. Pity it’s so damn hard to get to and park at. The Daviot double circle is much easier (I’ll do that another time).

I have to visit again when I have more time to spend there and perhaps when it’s not spring and the tractors aren’t quite so frantic. I have to go there at dusk too. It’s so far out of the way that if it’s haunted, nobody would notice.

If nothing else, dusk photos of the place would be killer book covers.

I must admit to being very impressed indeed at stone carvings done hundreds and thousands of years ago that are still clear today. They didn’t have angle grinders or etching tools. They had cold chisels and lump hammers and look what they did!

Could anyone do it now? 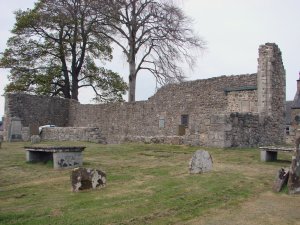 A last look at something that was seriously built to last.