The third Underdog Anthology will be for Halloween. Its title (currently fluid) will play on tree/three and the cover will carry a picture of something that was already in this garden when I arrived. 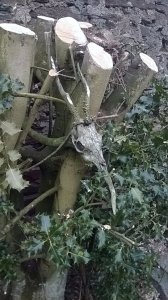 It won’t be that particular picture. I’ve taken a few from different angles and I’ll get some more before finalising. It will of course be fiddled with before it’s done.

The holly tree is significant in pre-Christian beliefs, along with the oak. I don’t yet know exactly when this skull was placed in the tree but the tree had grown around it to a considerable degree. You can see the thickness of the branches that were cut to reveal it.

Halloween has nothing to do with all this, of course. It’s an entirely separate event, centred on dispelling demons with the aid of bonfires. Early Christian oppressors banned bonfires on Halloween, we now have them back for a different reason on November 5th. I’m not going into a lot of detail here, don’t panic, it’s not a lecture.

I’ll very likely burn stuff on Halloween. That’s not really news, I burn stuff often. I like burning stuff and I still have an enormous amount of cardboard to dispose of.

This year there will be no delays. I’ll close the anthology to submissions at the start of October because I want it ready in plenty of time. It’ll be loaded up and available well before Halloween. Also, I plan something special for this one.

I intend to have a ‘cover’ for each author section, if possible for each story. These will be monochrome because colour print books are damn expensive to make. The print on demand model does not allow the insertion of ‘plates’ so if you need the top quality paper for colour images, they use that posh paper throughout. Monochrome images show up fine on standard paper.

I don’t yet know if I can get them into the eBook versions but the print one will be easy. I will experiment with an eBook version of Dirk Vleugels’ ‘Han Snel’ which is full of pictures. Colour ones too – so it’s a costly print book.

If you want to provide your own illustrations, okay with me but I really can’t guarantee to be able to pay extra for them over paying for the stories. It depends how the money goes, nearer the time. I’ll provide illustrations – now that I know how to make images like the back cover of Margo Jackson’s ‘The Mark’ there won’t be a problem. It will however take a bit of time to think up suitable images and produce them.

A quick tip – if you want to produce your own image for the book, the page size is 6×9 inches and the image quality has to be at least 300 dpi (pixels per inch). Yes, I know, inches. What can I say? I’m a Luddite who still lives in the dark ages and have already commented to the Ancient One in Local Shop today that I was happier when we still had shillings.

I go for 320 dpi for images because I once had a book cover rejected and had to readjust and resubmit. It was 300 dpi but when they made it fit the page it dropped to 298 dpi. Nobody on this planet could possibly see the difference but… computer says no.

So if you have your own ‘cover’ for your story make it 320 dpi and probably 5×8 inches to make sure it doesn’t hit the page edges. That’s 5 inches wide and 8 high, just so there are no misunderstandings. You can do it in colour if you want, I can greyscale it here. I’d rather you greyscaled it of course, it would make the file size much smaller for emailing, but if not, I’ll deal with it. It’s not a problem.

Also if I get the eBook images to work, they could be in colour. There’s no fancy paper involved so it doesn’t ramp up the price.

This post is an early warning for anyone who wants to get a Halloween story into the anthology. There were so many delays on the Easter one that it drove me nuts – I was on time but hadn’t factored in that the people receiving it for printing/distribution were mostly on holiday. Then there was the Smashwords debacle which meant their version was seriously delayed.

Not this time. I’ll close the anthology in the first week of October and have it online by mid October. It should be available well before Halloween even if there are more delays.

It’s still summer here in the North. The sky is a lighter grey, the birds are bedraggled, the grass and weeds are filled with the vigour of life and the rain is warm. It’s hard to think of horror right now. The nettles though, they will face the horror of my new battery powered strimmer at the first dry spell we get. I’ll be a herbicidal maniac among those trees!

Get those nasty ideas stirring. I’m not looking for submissions right now, I have Mark Ellot’s ‘Blackjack’ to finalise and there are more to do as well as my own stuff. You have plenty of time. Four months of time. You only have to come up with a short story, a few pages, as many as the story takes. Make it big enough and I’ll publish it as a stand-alone.

Don’t worry about fitting the ‘treeskull’ idea. Your story does not have to involve trees or skulls, that’s just the title of the anthology. I have an idea for a treeskull story that might well be based on real and local life and if you have one too, great. It’s not a condition though. Any scary campfire story will fit.

Just be ready to be edited. I won’t change your style but might change a few words. Roo B. Doo will, I hope, co-edit once again (I must find a way to pay her for this in some way!) and I really do want to have those in-book images to spice it up.

All the old ghost story books had illustrations. I’d like to bring that back.

5 thoughts on “Treeskull Tales – the next Underdog Anthology”