Underdog Anthology 6, ‘The Gallows Stone’, is just about ready for loading. Interiors for print and eBook versions are finished. I now have to do the hardest part of all, a roughly 100-word summary of the book. Everything else is on hold while I do this, including my new toy which arrived today (it’s a little laser engraver, I dare not take it out of the packaging until the book is completed).

This is going to be my first attempt at a wrap-around one piece cover. It has advantages – the printing process sometimes leaves a bit of spine on the front or back covers and vice versa. With a whole image that won’t matter. I can also have different fonts and different coloured texts on the spine which is not an option the ‘traditional’ way.

It has disadvantages. To get  the spine text lined up properly, I have to get the image size exactly right. There will be some drift in printing, I have noticed it already, but that text has to stay firmly on the spine. This is not as easy as the printer sites would have you believe.

Soon, CreateSpace will be no more. Everything going on to Amazon will go through Kindle Direct Publishing (KDP) including print books. Okay, that’s not a bad idea, it will make loading easier and quicker but… KDP’s cover creator is not compatible with the one CreateSpace used. I don’t yet know how serious this is but in a worst case scenario, I might have to redo the cover of every book in the Leg Iron Books catalogue.

I didn’t use their formatted covers, I loaded images that either I or the authors had produced. So it might not be a problem at all unless they have different cutoff points for cover text. That remains to be seen. If I do have to redo the covers I’d like to go for one piece wraparounds rather than separate front, back and spine images. Therefore I need the practice.

So, for Underdog Anthology 6, I have downloaded a template for a 130-page book (well, they have templates for 120 and 140 pages, so I will probably have to resize) and have begun the cover preparation. It’s a learning curve and I’d rather do it on an anthology where the authors get paid regardless of outcome than on a novel/story collection where the author is waiting for royalties. If I mess this up I’m the only one who loses out.

Anyway, the Gallows Stone cover has an image of, potentially, a real Gallows Stone that is built into the house I live in. I don’t know exactly where it is but I know which part of the house it’s in – the part added in the 1830s. And I now know where that is. It’s the part in the cover image. I can’t be sure of which of the stones are part of the original gallows stone but that’s part of the fun.

Well anyway. I have to write about 100 words, every one of which will be torn with fiery tongs from my bleeding soul because every one of them has to be exactly right. It was a damn sight easier to write the stories in the book. It’s going to take hours and whisky.

In the meantime, here’s the cover without the back cover words. I’m thinking graffiti style. 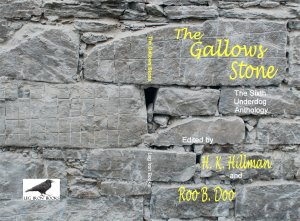 8 thoughts on “The Wrap Around Cover”